A few nights ago, Chelsea and I carved a few hours into our evening—she in Florida and I in Texas—to catch up over Skype. As always, our talk included several things: wine, inappropriate jokes, and the real stuff. At one point, she said, “The other day, someone told me I am made of light. That sounds so hippy dippy, but I don’t know—it made me feel good.” I told her I understood, because I thought I did. Today, I understand even better.

I’m looking out a large window to see snow falling, blanketing cars and trucks, dusting branches, covering the asphalt in such perfect white powder that stepping in it feels wrong. Through the walls of this conference room, I hear children—yelling, laughing, howling—and the lower tones of staff as they quiet, soothe, and reassure their students. 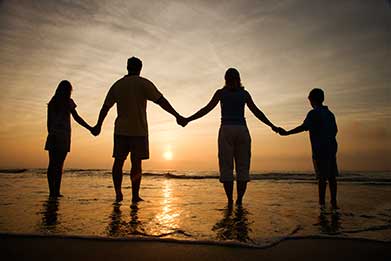 This week, the DECK team at RTC (as David, Erin, Corey, and I have dubbed ourselves), along with videographers Ben and Rebekah Hood, are in Oconomowoc, Wisconsin, filming at Genesee Lake School—a residential therapeutic school for children, teens, and adults with disabilities. It’s an organization we’re immensely proud to call our client.

Yesterday, we spent time with two sets of parents of children with reactive attachment disorder. We heard about the glint of butcher knives laid out on a counter in the middle of the night, about police calls and hospitalizations, about love so deep it even engulfs terror. We spoke to a colorful and articulate college freshman with Asperger’s disorder, who told us he wears a mask each day in order to best approach a world he doesn’t fully understand, and that doesn’t understand him.

Right now, I am sitting in the light. In the beauty of humans taking care of other humans, celebrating small triumphs and trying like hell to broadcast the big ones.

And today, Erin and I spent time in several classrooms for extremely low-functioning kids with autism. These are kids who, in another life, might be taking driver’s ed or receiving their first kiss, but who, in this one, struggle to communicate their most basic needs and wear helmets with face masks to protect from self-injury. We spoke to a direct care staff member, a horse lover not much older than her charges, who showed us the scars on her arms and hands from the scratches of one particular child. “She’s one of my favorites,” she said, smiling.


And what I feel, as I look at the snow silently matching the color of sky to ground, is: this is the light. Right now, I am sitting in the light. In the beauty of humans taking care of other humans, celebrating small triumphs and trying like hell to broadcast the big ones. The light is possibility—pure and endlessly brightened by our desire and determination to access it.