Imagine your child being calm and playful, then the next moment, trying to bite, punch or scream at you. Picture never knowing what behavior to expect and withstanding a daily onslaught of frustration and exhaustion . . . and seeing only glimmers of hope.

“You would go through all these different [painful] things because you’d see the little things that made a difference,” Rebecca* says about her fourteen-year-old adopted daughter, Mandy*, whose mental illness affects her ability to form positive relations and regulate her emotions. “But then she would come at you and punch you in the face or bite. We had to restrain her on the floor and on her back so she would calm down. It was just every single day.”


There were times when Rebecca championed her daughter, insisting to her husband that despite the difficulties, they couldn’t consider removing their special needs child from their home. They were her parents, after all.

Then there were also times Rebecca locked herself in the bathroom, crying and thinking: I hate her. I hate this girl and I hate what she has done to our family.

Four-year-old Sophie* was not at all like the baby Jennifer had envisioned. When she was born, Sophie was weak and timid, not robust and playful like Jennifer was sure any child of hers would be. As an infant, Sophie cried so hard she vomited on a daily basis. She was sensitive to sounds — the ripping of paper would send her screaming. And even as she grew, she refused to make eye contact, answer direct questions, or make friends.

Sophie, Jennifer acknowledged, was a disappointment. Sophie was not the daughter Jennifer had hoped for.

In a 2011 Redbook article, Jennifer laid out her confession. "I felt guilty that I was basically repelled by my own child . . . This just wasn't the magic mother-daughter bond that every book I read, every movie I saw, and every family I'd ever met had led me to expect," she said. 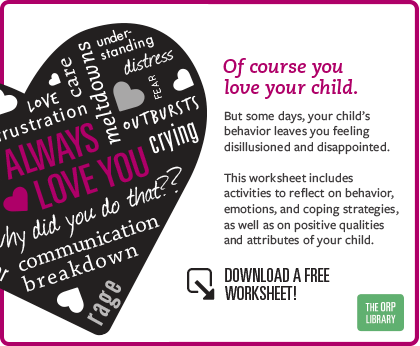 Once she gave birth to her second child, Lilah*, Jennifer realized the problem wasn't with being a mother. It was being a mother to Sophie. In contrast to her older daughter, Lilah was everything Jennifer had dreamed about her being: strong, healthy, and confident. The maternal bond was immediate and strong.

But Sophie was not normal, and Jennifer had a hard time getting past that.

It may be hard to admit not having a strong emotional bond with a child, but it's not uncommon. A study by researchers at four U.S. and British universities, including Princeton, of 14,000 U.S. children without identified special needs found that even 40 percent of those studied lacked strong emotional bonds with their parents.

When a child has a mental disorder or developmental disability such as oppositional defiant disorder, reactive attachment disorder, or autism spectrum disorder, it can be even more difficult to create that dreamed-about connection with a child. The daily meltdowns, and verbal and physical aggression, often interferes with the development of strong emotional connections and bonding. And when families are also dealing with uncertainty of their child’s diagnosis, appropriate treatment and support, managing special education, balancing time between the spouse and other children, and deal with the employment, insurance, and financial issues that come with having a child with a disability, the constant stress can severely strain even the healthiest relationships.

Certainly not all parents experience feeling disappointed in a child, but those who do may be hesitant to admit it, fearing that others won’t understand. For Jennifer, the response to her Redbook confession was harsh.

"No child should have to suffer the abuse of this clearly narcissistic, failure of a mother," wrote one reader. "The world can be cruel enough without being able to rely on the one person on whom a child is supposed to be able to always count for unconditional love and acceptance."

Others found solace in Jennifer’s confession. "So needed to read this. I hit a low point tonight with my child and I don't ever want to go there again. Thank you for sharing your story," another woman said.

It's hard to admit sometimes not always liking your child. But unless parents struggling with the issue admit it, at least to themselves, they won't ask the right questions or get the right support to improve the relationship. 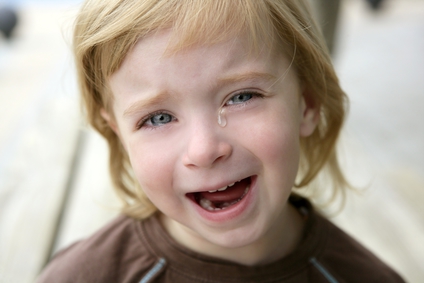 Has a physical, emotional, or mental disability in your child altered the vision you had of family life? It's okay to acknowledge the loss of a dream, and to take time to mourn a little. Accepting a child's limitations can be challenging, but it's key to releasing guilt and anger.

Are you taking on responsibility that doesn’t belong to you? Parents may feel they are to blame when their child gets in trouble at school or goes into a rage at the grocery store, as if the child's behavior is a reflection on his or her upbringing. Parents may feel embarrassed, helpless, and ultimately angry — emotions that don't lead to feelings of liking or love. It’s important to keep in mind that your child’s behavior is his or her attempt to get unexpressed needs met, which does not reflect on your parenting . . . even if you can’t explain that to those who look on.

What are the child's strengths? Many parents spend so much time focusing on their child's challenges that they may overlook their child's great memory, strong determination, or gentle playfulness. By focusing on loving the child who is there — and not the fantasy child who is not — parents can release some of that disappointment and leave a little room for appreciation instead.

Both Rebecca and Jennifer, the moms whose stories are shared above, were ultimately able to work through their conflicted emotions about their children. Their first step was admitting and accepting that those feelings were there. They also sought and got help with their struggles. Consider following in these moms' footsteps and get the support you deserve.. You, your well-being, and your relationship with your child are worth the time and effort.

*Names have been changed to protect the anonymity of individuals in this story.